The best predictor of weight gain is dieting, according to researchers. Does that hold true for you?  Do you weigh more now than before you started a long history of dieting?

What is it that makes so many of us so unhappy in this world, in our own bodies, that we become obsessed with changing our size and/or shape?

Are we erroneously blaming our bodies for all the inappropriate, uninformed, and sometimes just plain rude or mean things other people have said to us about our bodies?

Today, you get to stop blaming your body. You can take back your power. You can recognize that the negative messages came from elsewhere…or maybe you misinterpreted what was said to you, as was the case with Becky, the person whose story you’re about to read.

Today, you get to forgive your body. It didn’t do anything wrong! Then, you can choose to treat your body with more respect and self-care. That’s what Becky is doing!

Do you have a “What Shapes Us” story to share? If so, please  send it to ellen@aweighout.com . We can publish it anonomously, using a first name or initials, or your full name…it’s always your choice.

When I was a child I grew quickly – I was often told I was a “big” girl. I interpreted that to mean fat and fat in my family was looked upon as a bad thing.  My grandmother whom I lived with the first 2 1/2 years of my life was fat.  Somehow it must of been pointed out often because I always remember looking at her and thinking “fat” when I looked at her, as far back as I can remember.  Yet she was such a special part of my life – she was a wonderful grandma to me.  I loved her very much.  She used to tell me stories of how I would stand at the refrigerator door when I could barely talk and say “Meat” – which meant a piece of cheese or meat. 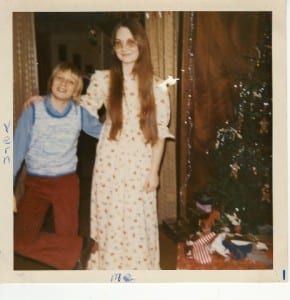 I somehow got the impression that fat and big were not the preferred thing to be.  I passed my mother up in size around the age 10.  I also had a brother who was quite small in stature for his age.  I was compared to him and my mom often.  I don’t think it would have been a problem except that I already had the concept that small and little were better than big and large.  I had another grandmother (who favored boys) who told me I had to be careful not to hurt my brother because he was so little and I was so big.  We were only 2 1/2 years apart in age.

Other incidents that came to mind were:

When I was eleven and went to the fair with a babysitter they wanted to charge me full price.  The sitter teasingly told them they “make them big Up North.”  It truly was a cute comment that I love recalling to this day, however I know it added to my ideas about my size. (By the way my babysitter was fat – and I loved her to pieces – she was like a second mom to me.)

When my parents made their rounds to bars on Sunday afternoons and my brother and I were along, one of my pleasures was being able to get bags of potato chips.  The bartender once commented that I didn’t really need another bag of chips – something to the effect that I would get too fat.

My mother always talked about weight and weighed herself daily so I did not know that was not normal.

When I asked if I was fat I was told I was “hippy”.

Some boys walking by when I was jumping rope yelled out “elephant legs”. Again I took that to mean fat.

When my grandparents made comments like I was too big to pick up and swing around like my brother, I took that as fat.

When I was young I can remember arguing with my dad about getting the last pork chop at dinner time.

My nick name was apple cheeks cause of my round face.

There was a boy that liked me in 7th grade.  I was telling my mother’s friend about him but that I didn’t want to go steady with him because he was fat.  My mom’s friend immediately told me that wasn’t a reason.  That was the first time I realized that saying someone was fat or not liking them for that reason was not right.

My best friend in my adult years was fat – she was an amazing person – everyone wanted to be around her. I always marveled at how she handled her size like it didn’t matter. I realize now she understood that her size was only a part of who she was.

I remember these comments to this day. I realize now these things contributed to my perception of how I viewed myself. I remember thinking small and blonde was better than big and brunette – so silly!

Even at the time of that picture, my brother and me in the 1970’s, I thought I was fat – and was always trying to diet.  I don’t think anyone meant anything personally or meant harm, but that is how I took it all…

Ellen Shuman is a Life Coach who specializes in emotional and binge eating recovery. She is the founder of A Weigh Out & Acoria Eating Disorder Treatment, a Past President of the Binge Eating Disorder Association; BEDA (merged with NEDA), and started the Academy for Eating Disorders Special Interest Group on “Health at Every Size”, ellen@aweighout.com

How do I learn not to be afraid of certain foods?

We get hit with so many messages about “good” food and “bad” food, it can be difficult to keep things in perspective, and perspective is

Binge Eating Thoughts; What Did I Really Need?

These days, if I ever feel I’m at risk for binge eating, actually, whenever I have a food thought these days, I calmly ask myself,

I Ate My Way Through Costco, Guilt and Compulsive Eating Free!

Yesterday, I went shopping at Costco and as I shopped, I ate my way through the store, occasionally, selectively, one tasty food sample at a

A Weigh Out’s new EMPOWERMENT FORUM has launched!!!  Yes!  This FORUM replaces the old one that required a second login step (that was just too much work!) Members—Login