Beyond Fen-Phen and Redux 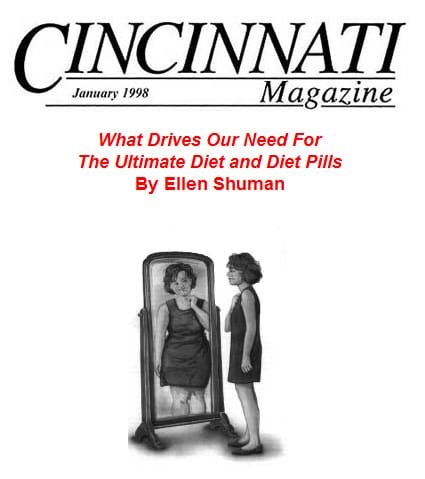 (Please Note…I wrote this article BEFORE I was health-focused and weight-neutral. But it’s a glimpse into why diets don’t work for anyone, and especially for people who struggle with emotional eating.)

A coworker and I went out to dinner last night to celebrate some changes in our lives that were well worth celebrating. I ate a lot! Bread sticks with roasted garlic and olive oil, salad with ranch dressing, more bread, and then an entre with garlic mashed potatoes. By the time our waitress asked if we’d like to hear about the restaurant’s ‘incredible desserts’, I felt like I was going to explode. Still, my friend and I decided to split dessert.

Within milliseconds of ordering dessert, those old familiar voices of panic and shame filled my head. “What on this earth are you doing? Do you want to restart that cycle of bingeing and gaining weight all over again? You’re going to screw it all up again! This isn’t worth it.” Then amazingly enough, just as quickly as those “all or nothing” panicky thoughts appeared, they disappeared. They were replaced with more sane, calming thoughts. “Hey, it’s O.K.. You have good reason and every right to celebrate! One meal is not going to kill you.” I knew at that moment that I would choose to do a little extra time on the treadmill the next morning and that everything would be just fine. And, that was that! It turned out to be a wonderful evening, free of guilt and free of those hollow, desperate deals I used to make with myself, “O.K. I’m going to eat this now, but I’ll start my diet again first thing tomorrow morning. I swear I will.”

I don’t diet anymore! I no longer believe I have to be a certain size (often unrealistic) to be happy. What a relief! I now know that dieting and diet pills like Fen-Phen and Redux treat a symptom: the weight. But they never address the real problem – emotional eating. Diets and diet pills can actually mask the real problem, which for me was the use of food to calm myself, to reduce tension. Today, as director of an eating disorders treatment center, I’ve learned that there are a lot of emotional eaters out there just like me. I am in very good company.

Janet E., who works in a scheduling department for two local hospitals, found that she did a lot of her overeating late afternoons, during her busiest times at work. When she’d leave work and go home, she found that mindless snacking on potato chips and Cheetos helped her to change gears, to relax before having to make dinner. When Janet quit smoking three years ago and gained 20 pounds, on-again off-again dieting became a way of life. “Always, I dieted to reach a certain measured goal. I’d lose the weight, stop dieting and then regain it, over and over and over again.”

Marilyn K. always thought there would be some top weight that her body would hit and then not go beyond. She was mistaken. Marilyn, now 60 years old, says she had been a “compulsive overeater, forever”. She says, as far back as she can remember, food had been her only source of comfort, just as alcohol had been her alcoholic father’s primary source of comfort. Her use of food to “self soothe” became especially problematic around the time of her divorce. “Whenever I felt any uncomfortable feeling or sensation in my body, I translated that feeling into, “I’ve got to go get something to eat.” With her weight still climbing, she ran out of diets and diet programs to try. She says she felt totally out of control and hopeless.

Diets don’t work because, for many people, this is not a body problem. It’s a head problem. What you do with a diet is you hassle the body but you don’t touch the head stuff. According to therapists at my Acoria Wellness and Eating Disorders Treatment Center, the structure of a diet gives an emotional eater an artificial sense of control. If your life feels chaotic and you feel you can’t control your circumstances, your reactions to others, your feelings or your own behaviors (let alone your food choices), the perfect diet or diet pill will appear very attractive and seem like the best way to gain control.

Then there’s that moment for all emotional overeaters when the strict diet ends and again you’re back to experiencing the same anxieties or loneliness or boredom that you were using the food (or a structured diet) to avoid in the first place. And when the diet fails, the overeating and internal tension come back with a vengeance. The use of food as a person’s primary tension reducer, “stuffs down the feelings”. All that focus on the weight and/or the diet, blocks the person from getting in touch with the underlying problems, thereby insuring that the overeating will have to continue to keep the real problems and feelings at bay.

Whenever Marilyn K. experienced an uncomfortable feeling, it never crossed her mind that she could manage her discomfort in any other way other than to turn to food. Janet was not aware that she was actually using Cheetos to smooth her transition from work to home.

Overweight, and a compulsive dieter since childhood, I first became aware of this coping strategy when I was 30 years old. I’m in this psychologist’s office trying to figure out why I weighed almost 300 pounds. He diagnosed me as depressed (who wouldn’t be). Week after week, I gained pound on top of pound. I’d sit in his office and anytime he brought up something that made me feel the least bit uncomfortable, I’d have what I now call “a food thought”. Sitting on his couch, I’d start to plan what I was going to eat as soon as I left his office. Which fast food restaurant could I drive through on the way home? The very second my head was filled with a food thought, I was out of the moment. I was no longer feeling the anxiety or fear or sadness, or whatever it was I had starting to feel when the therapist approached any subject that I didn’t want to explore. Without ever being conscious of this coping strategy, it had become a way of life for me, since childhood… and it worked!

Years later, when I was working with a therapist who knew how to directly connect my food behaviors with the underlying reasons why I was using the food, I started to notice when, where and why I had food thoughts. I noticed they came fast and furiously whenever I was at my computer feeling overwhelmed by an overdue project. I had food thoughts whenever I got angry at my Mom and whenever I felt someone had disappointed or wronged me. From the food thought…to the food acquisition and eating, to the numb disconnected feeling I’d get after a binge, I could avoid feeling anything and everything for hours. Food works!

Why food as a coping strategy? Maybe because, from day one, our cries of hunger are met with our mother’s breast or with a bottle and we learn to associate food and being fed with being nurtured and soothed.

Why me? Well, biochemically, it appears some of us are wired more than others to get a calming effect from certain foods. Carbohydrates, sweet and starchy foods (which are what most of us binge on), lead to the production of the amino acid called tryptophan. Tryptophan helps boost serotonin levels in the brain. Serotonin is a naturally produced brain chemical that’s responsible for feelings of calmness, emotional well-being and satiety. Serotonin is also the mood-regulating chemical that’s in short supply when there’s depression.

Our Clients have this sense that their relationship with food is like a relationship gone bad. Clients may come to the Acoria Center with an awareness that they eat when they are tired or stressed, but more often han not, the self-regulation piece is new. Light bulbs start going off the minute we start talking about this self-regulation piece, about the use of food to manage transition times (like the transition from work to home at the end of the day). When we talk about being disconnected from both their feelings and from their body, about their use of food to manage and maintain their emotional life, these are revelations people are stunned by.

So if you are “using” food in this way, what will it take to stop the cycle? How can you achieve and maintain a healthy weight?

First, you have to stop dieting! For an emotional eater, a diet is not the answer. (If you can reach and maintain a healthy weight simply by eating a little less and exercising a little more, you are probably not a serious emotional eater.) Secondly, emotional eaters have to become aware of how and why they are using food. What are you asking the food to do for you? What’s really going on when you mindlessly plow through a whole bag of cookies right after a big meal?

Through a nurturing relationship with a therapist, and through group support, Marilyn and Janet have each gained more awareness of the role food was playing in their lives. They have dealt with the underlying issues and anxieties in their lives that were driving the need for the food behaviors. Through therapy they began to develop and use their inner strengths. Today they each have a variety of coping strategies to use to self- soothe themselves when emotionally stressed.

Marilyn says today, when that old familiar desire to binge hits her at night, she has learned to stop and to think. She puts some time between the “food thought” and the resulting behavior. She now knows she can choose to do something else to calm herself. After some experimentation, she found playing her piano works best. (She says she tried reading but found it was too easy to read and eat at the same time. Not so with the piano.) Over the course of a year and a half, Marilyn stopped much of her bingeing and has lost 70 pounds.

Janet has lost 30 pounds since last March. She too found she could employ some healthier, practical coping strategies. Today she is taking more emotional risks, expressing her feelings rather than eating over them. Busy afternoons, rather than eating, she now reduces her stress level with a 15 minute walk around the hospital. On those days when she still needs something to buffer her transition from work to home, she always has a yogurt or a bagel at hand, rather than chips and Cheetos.

I too have learned to use my thinking/reasoning self to self-regulate, to be less black and white, to remind me that it’s not the end of the world if I occasionally overeat at a meal. In the not too distant past, the guilt I’d feel after a dinner like the one I described at the top of this article, would have lead to at least two full weeks of overeating and feelings of being totally out of control.

I’ve thrown away my scale and I like knowing that the clothes in my closet will still fit me tomorrow morning.

A few final words of advice for anyone who is trying to reframe the way they think about their weight and their chronic dieting … Stay away from anything where the root word is die. That’s never a good sign!

Today, Ellen Shuman is a Life Coach who specializes in emotional and binge eating issues. She is the founder of A Weigh Out & Acoria Eating Disorder Treatment, a Past Vice President and President of the Binge Eating Disorder Association (BEDA recently merged with NEDA), and started and Co-Chair of the International Academy for Eating Disorders Special Interest Group on “Health at Every Size”, for a decade,  ellen@aweighout.com