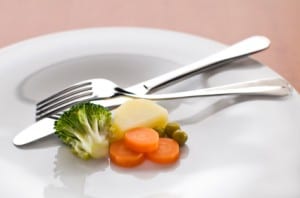 As you come to understand that diets don’t work, the next step is to develop an approach to eating that offers you a healthy relationship with food.

Known as attuned eating, intuitive eating and mindful eating, the non-diet approach guides you in shifting from the external rules and restrictions of the diet mentality to honoring internal, physical cues for hunger and fullness. As an attuned eater, you learn to listen for a gnawing feeling in your stomach to tell you that it’s time to eat, determine what type of food(s) will satisfy your hunger, and pay attention to feelings of satisfaction and fullness to decide when to stop eating. As you learn to trust your own body to tell you when, what and how much to eat, you’re likely to feel relaxed, satisfied and nourished in your relationship with food.

If only it were that simple! While eating when hungry and stopping when full may sound like an easy concept, the simple truth is that after years of dieting and overeating, it takes practice to integrate this method of feeding yourself. It’s not uncommon for people to actually turn the steps of the non-diet approach into a new diet, which we sometimes refer to as the “stomach hunger” diet. If you’ve decided that you can now only eat when you’re hungry and that you must always stop the moment you’re full – without giving yourself the time and space needed to gently work your way out of overeating patterns – then there’s a good chance that you’re on a “non-diet diet!” Here’s an example of how one diet survivor inadvertently traded in her old set of diet rules for a subtler version:

Katherine, a married woman in her forties and the mother of three children, has been working on becoming an attuned eater for the past six months. She feels great relief to no longer be feeling the deprivation of diets, and loves the moments when she can make a truly good match for her hunger. In fact, Katherine explains that most of her eating now occurs when she is physically hungry, and that most of the time she can figure out what she is hungry for. The problem, Katherine laments, is that she keeps eating more food than she is hungry for.

When Katherine explained her situation, she said that she knew when she was full, but kept going anyway. Rather than judging herself for overeating, the task for Katherine was to become curious. She ended up feeling physically uncomfortable afterwards, so what was going on that Katherine chose to overeat?

Katherine was asked whether there was an emotional component to her overeating. In other words, if she stopped at the moment she was satisfied, what would she think about or feel? Was there something bothering her? Was there something she was putting off doing by continuing to eat?

After some reflection, Katherine concluded that there was no emotional purpose served by her overeating. Instead, she revealed that she believed she should stop eating when she was “somewhat full” even though she didn’t want to. When asked to elaborate on what she meant, Katherine said that as she talked about this problem out loud, she was just realizing how she tells herself “it’s better” to stop when she is just beginning to feel full, even though she often doesn’t feel quite satisfied. It turned out that in the back of her mind, Katherine was still pursuing weight loss, which meant that eating less was required! And, not surprisingly, the minute she told herself that she shouldn’t have more than that, she felt compelled to overeat because of the sense of deprivation she experienced. She was falling into the diet mentality without realizing it, and turning the non-diet approach into a diet.

As soon as Katherine made the connection of what was happening for her, she was able to make a conscious decision to approach eating differently. She would give herself permission to eat exactly the amount she needed in order to feel physically and emotionally comfortable. Making this gentle commitment to herself took away the pressure to eat only a certain amount at meal time. If she wanted to stop when she was somewhat full that was fine, but if she wanted to be fuller, that was fine too. Most importantly, she decided that she would now consistently ask herself, “How do I want to feel when I’m finished eating,” and use that as her guide.

Katherine saw an immediate decrease in the number of times she ate past fullness. Rather than deciding that she could only eat a certain amount, she gave herself permission to eat whatever she needed at a particular time. Paradoxically, this permission took away the feeling of deprivation that occurred when she thought there was a limit – albeit imposed by her decision – as to how much fullness was allowed.

Moving toward attuned eating is a journey that takes place one eating experience at a time. If you find yourself having trouble honoring your hunger or fullness, check in to make sure that you haven’t established new rules about doing this “perfectly.” When you diet, you’re either “on it” or “off it”; you’re either “good” when you “follow the rules” or you’re “bad” when you “blow it.” Nothing could be further from this diet mentality as you practice attunement, compassion and curiosity to develop a peaceful and satisfying relationship with food.

Eat well! Live well! Be well! Judith Matz and Ellen Frankel, are co-authors of The Diet Survivor’s Handbook, Beyond a Shadow of a Diet www.dietsurvivors.com Chicago Center for Overcoming Overeating: 847.267.1200

Eat well! Live well! Be well! Judith Matz and Ellen Frankel, are co-authors of The Diet Survivor's Handbook and Beyond a Shadow of a Diet www.dietsuvivors.com and Chicago Center for Overcoming Overeating: Judith Matz

The more colorful the fruit or veggie, the better it is for you. Here are some of my favorites which are available year ‘round. Healthiest

“A Matter of Pride”

Although we are all susceptible to the occasional cold or flu, there are some ways to ensure that your immune system is functioning at its

This week the Baltimore Sun reported that first lady Michelle Obama was at Camden Yards, home of the Baltimore Orioles, to announce that Major League Baseball was

Facing the Death of a Friend

I’ve never experienced the death of a friend, a peer. And, Jennifer Moore, how is that possible? About a year and a half ago, I